I was super excited for this movie. Not only did the casting seem brilliant but we get to witness Ruth Bader Ginsburg’s incredible and empowering story. One of the first women to attend Harvard Law School, shaping young minds as a law professor and litigator (because hiring a female lawyer was apparently unheard of), to being the second woman appointed to the Supreme Court of the United States, where she remains at the age of 85, still fighting for equality for women and minorities. Seeing all that, and more, on the big screen? Count me in!

I wouldn’t have thought of this myself but the casting director did a brilliant job with Felicity Jones and Armie Hammer as Mr. and Mrs. Ginsburg. It just worked, I can’t really explain why. Now that I’ve seen it, I don’t know who else could or should have played them. I understand that they might not be remembered for these roles but the characters, Ruth and Martin Ginsburg, definitely will be.

Going into On the Basis of Sex, I knew of RBG and her reputation, but not exactly how she achieved what she did. I learned about an extraordinary woman who never backed down, and stood up for what she believed in. The film focuses on her start in law, her relationship with her husband and children (especially daughter), and how she made a name for herself by fighting for what she believes in. Thus, it isn’t a complete biography. It doesn’t show her life until now. Instead, you see her struggles and triumphs working her first major, breakthrough cast. Sexual discrimination against a man.

As the movie was written by Daniel Stiepleman, who is RBG’s nephew, I believe it was pretty accurate apart from a few liberties, of course. Although the film deals with a very serious subject matter, I still found myself laughing every now and then. The tone was sincere, serious but still humorous when it was appropriate. Sometimes I wasn’t even laughing because it was funny but because of how sad things used to be, and still are.

I really enjoyed the way they showed the spirit of that time. How women and minorities were starting to rise up, fight back. How the men, and some women, just could not let go of the way things had always been. Great portrayal of the zeitgeist, in my opinion. The entire movie is an exemplary project.

With this, the movie is more than a tribute to an icon. It reminds us that as much progress as has been made in the past, there is still so much we need to work towards.

As much as I adored the movie, I might have expected too much? Which is my fault, honestly. I really liked what I saw, but thought there would be more? That’s why the rating isn’t as high. I still most definitely recommend this film!

Have you seen this movie? What did you think? Are you planning to? Let me know! 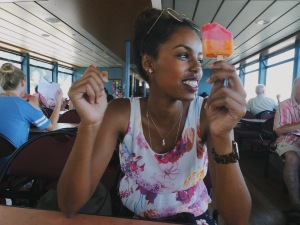 Read My Blog In Your Own Language